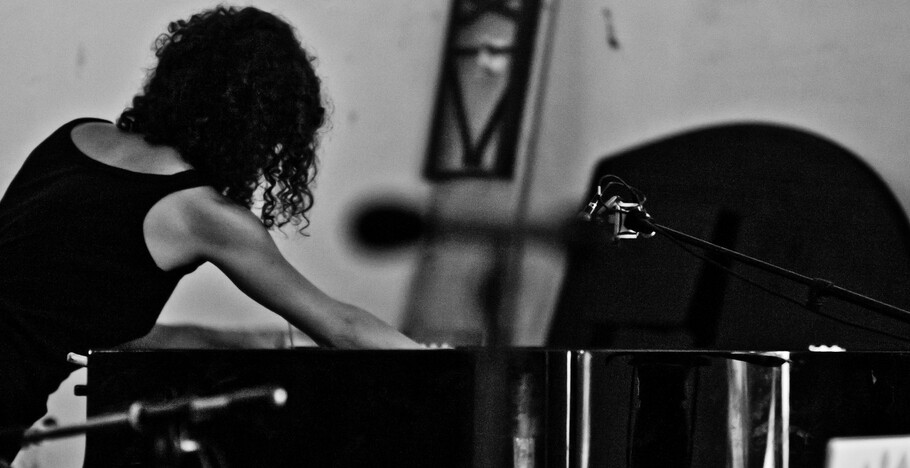 Since 2015, she is undertaking Phd studies at the University of Gothenburg, Sweden in Music Performance and Interpretation, investigating instrumental techniques, timbre and spatiality in improvised music performance.

Mayas performs internationally solo and in collaboration with a large number of musicians and composers.

She has performed and toured in Europe, the USA, Australia, Mexico and Lebanon and collaborated with many leading figures in improvisation and composers such as John Butcher, Andy Moor, Zeena Parkins, Joelle Leandre, Paul Lovens, Ikue Mori, Phill Niblock, Peter Evans, Andrea Neumann and Axel Dörner. She has performed at festivals and exhibitions such as Maerz Musik (2012,2015), Documenta (2012) or the Berlin Biennale ( 2014).

2013 Documentary for ABC Australia, “Inside Piano”

approaches and styles of improvised music, particularly the “Echtzeitmusik” scene in Berlin, interviews with practitioners and curators

2015 sound essay for ABC, Australia, Creative Audio Unit,  “Home is where the heart is”

Magda Mayas has been curating experimental music events and festivals in Berlin since 2005.

As part of her ongoing research, Mayas founded “Tasten-Berliner Klaviertage” festival, running from 2005-2009, during which contemporary and innovative approaches for the piano were presented, (www.tasten.org), featuring pianists and composers such as John Tilbury, Anthony Pateras, Chris Abrahams and Ian Pace.

artistic director of “COMPASS” Festival together with Tony Buck, an exchange between leading Lebanese and Berlin musicians and sound artists.

(with support from Goethe Institut and Bezirksamt Pankow Berlin)

Magda Mayas has been giving workshops and masterclasses at Universities and festivals all over the world.

3 day symposium on Cage, the prepared piano, history and modern approaches of inside piano playing

SOMA, 2014, Prepared and Inside piano in history and modern practice

2015 with Tony Buck on Approaches in Improvised Music